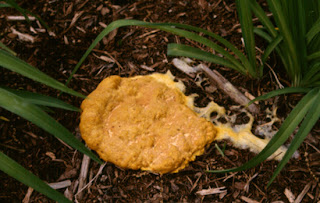 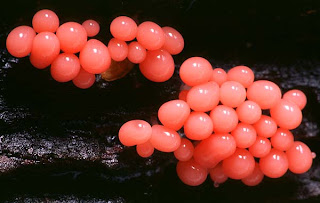 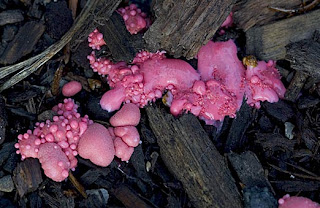 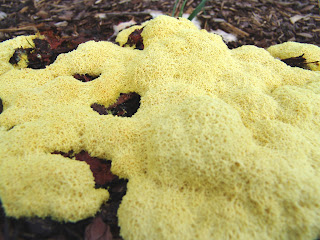 What is this?
What you see above is “Slime mold”.  This common name refers to part of some of these organisms' life cycles where they can appear as gelatinous "slime".
There are three main types of “Slime molds”.  What these three groups have in common is a life cycle that superficially resembles that of the fungi. However, slime "molds" are now known to be quite unrelated to the fungi.
Did you know, ”Slime molds” were once considered to be animals due to their creeping phase. However,  DeBary, one of the founders of mycology, called them Mycetozoa, from the Greek words myketes (fungi), and zoon (animals). http://www.colostate.edu/Depts/CoopExt/TRA/PLANTS/slime.html
Also, “Slime molds” have been classified in a major group called the eukarya (or eukaryotes), which includes plants and animals. http://www.infoplease.com/ce6/sci/A0845543.html
What do they look like?
As seen above slime mold have many shapes and textures. The most common forms resemble small purple or black ball attached to a blade of grass and the really noticeable creamy-white, yellow-orange, purple, or gray jelly-like mass situated on the lawn. The colonies of slime mold living on logs and bark mulch can be strikingly colorful in yellow, orange or red. http://serendip.brynmawr.edu/biology/b103/f01/web1/blucher.html
Where do they live?
The slime molds live in cool, shady, moist places on decaying wood, leaves or other organic matter retaining abundant moisture. Bark mulch in a flower garden or shrub bed certainly fits that description. The same type of organism is often seen in the woods on decaying logs. Over 700 species are reported as existing. http://www.colostate.edu/Depts/CoopExt/TRA/PLANTS/slime.html
What is a typical Slime mold life cycle?
The molds form spores, the spores spread (upon the release of a chemical signal), the spores turn into amoebas and then they become slime and spread more!


Check this video out:
You have just witnessed "Slime mold" in full effect!!!
....ewa GROSS, but sorta COOL, right?!?!

What do they eat?
Slime molds feed on decaying organic matter, bacteria, protozoa, and other minute organism which it engulfs and digests. In rare instances the slime molds have been known to creep over ornamental plants, causing suffocation. http://www.colostate.edu/Depts/CoopExt/TRA/PLANTS/slime.html
***DID YOU KNOW***
The "Slime Mold" Case Study
I heard about this a year ago when I attended UC-Berkley CED(College of Environmental Designs) 50th Anniversary Lecture Series.  Janine Benyus was speaking one evening and as she discussed the many ways in which nature seals leaks, stores energy, repeals bacteria, quiets noises, and insulate t h e n she began talking about… slime mold!
This seemingly gross organism has a lot we can learn from! A Japan-based research team found that if they placed bits of food (oat flakes) in the same location as 36 outlying cities around Tokyo, the mold communicated and grew! This growth and spreading created a network connecting the food sources that looked rather similar to the existing Tokyo rail system and it only took the mold 26 hours to develop! 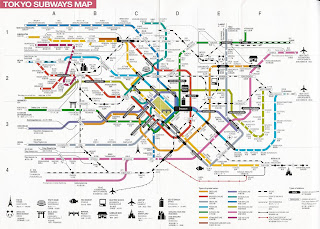 In fact, the researchers wrote that this slimy single-celled amoeboid (a.k.a. Slime mold) can, “find the shortest path through a maze or connect different arrays of food sources in an efficient manner with low total length yet short average minimum distances between pairs of food sources, with a high degree of fault tolerance to accidental disconnection” AND all without the benefit of “centralized control or explicit global information”. In other words, slime mold can build highly efficient connective networks without the help of an urban planning board. http://www.scientificamerican.com/blog/post.cfm?id=what-we-can-learn-from-slime-mold-h-2010-01-21
Below I have clipped some progress shots from the 26 hour experiment: